This video describes how we create “Captured Lightning” (Lichtenberg Figure) sculptures. It was assembled from video clips that were captured over several years of production. In order to make Captured Lightning, our team of experienced “Spark Whisperers” uses a 5 million electron volt (MeV) particle accelerator to inject hundreds of trillions of electrons deep inside pieces of clear plastic (polymethylmethacrylate, or PMMA). The electrons come to rest about 1/4″ to 1/2″ below the irradiated surface, forming a cloud-like layer of negative charge, called a space charge. Since PMMA is an excellent electrical insulator, the intensely charged layer is temporarily trapped inside the specimen, similar to the way charge becomes temporarily trapped within clouds in a thunderstorm before a lightning strike.

Fully charged specimens are then carefully discharged by tapping the surface using a metal point. This creates a weakened pathway that allows the trapped electrons to suddenly escape. As they surge out, they form a highly-branched network of high-current, lightning-like electrical discharges. The white-hot discharges create countless branching chains of microscopic fractures and tubes within the PMMA, leaving behind a permanent “fossil” of the paths that were originally taken by the discharges. The scientific name for these patterns is Lichtenberg Figures. They are sometimes called “Beam Trees” or electrical trees – we call them Captured Lightning sculptures.

Unlike laser art, the branching fractal discharge patterns are unique for each sculpture. They are also incredibly detailed – the finest tips are thought to extend down to the molecular level. As with snowflakes, every sculpture is truly a unique work of scientific art, individually sculpted in billionths of a second by an unstoppable torrent of raging electrons. 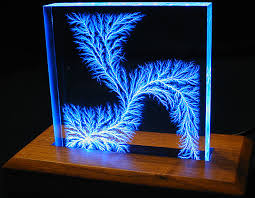